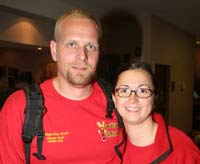 Prior to 2014, Vertical Visions was involved in the parachuting industry.   Jason and Jennifer helped organize the world's largest parachuting event while developing various products to support it.  Video camera mounts, photo and video production, and a 2500 lb mechanical human catapult system that launched BASE jumpers 20' vertically and 50' horizontally were created.  Jason has been featured on numerous TV shows such as Good Morning America and the Discovery Channel.